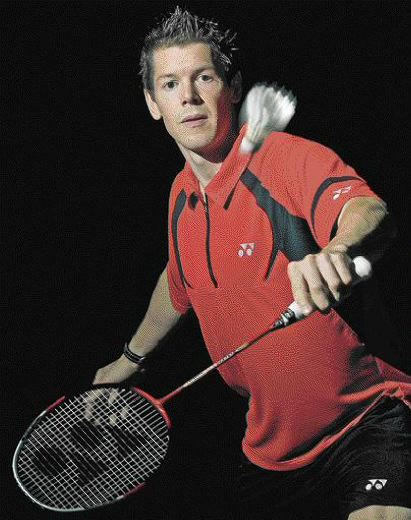 Andrew Dabeka had a 'career match' in pushing the '04 Olympic champ to the limit before losing last fall.

Dabeka gets eight to 10 hours a day to avoid burnout

Quote: 'I did research into the top men and women in sports. The common theme was they were all so professional. They wouldn't allow anything to break their rhythm.'

Andrew Dabeka will approach his first men's singles badminton draw at the Summer Olympic Games with a special weapon in his athletic arsenal.

But it's all perfectly legal. The International Olympic Committee and World Anti-Doping Agency have no known test to catch an athlete using this method of preparation to compete in the Beijing Games.

It has worked well over the past year, and Dabeka hopes it will make a difference in his performance and end result at the Olympics.

Dabeka's confidence and ability to survive international badminton's year-long Olympic qualifying process simply is fuelled by something everyone does, but doesn't get enough of -- sleep.

"Every day, I sleep a lot, an average of eight to 10 hours a day," he said in a recent interview. "I must do my training, but I must prioritize my sleeping."

As he prepared in early 2007 for the Olympic badminton qualifying period (May 2007 to May 2008), the five-time Canadian senior men's singles champion knew a proper night's sleep would have to be the backbone of his road to the Beijing Olympics.

"I talked to other players on the tour and a lot are exhausted and burned out," he said.

When Dabeka finished his 23-tournament, 23-country Olympic qualifying tour, he felt strong after being the top North American in men's singles and earning a berth in the Games.

"I still feel fresh and motivated," he said.

For the first time in his career, the top-seeded Dabeka won the U.S. Open by sweeping all four matches without losing a game. He easily defeated Martin Billie Larsen of Denmark, who is ranked 106th in the world, in the final 21-14, 21-9.

Dabeka had to be disciplined and organized to follow the Olympic qualifying circuit. Besides his racket and badminton clothing, he also had to take his sleeping gear.

"Sleeping was never an issue," he said. "The only cost was time spent talking to friends. On the road, there was a minimal amount of fun time. I was a Gloomy Gus, at times, going to bed early with my eye mask and plugs for my ears ... to make sure I got the best sleep possible."

Dabeka has taken a business-like approach to his sport for more than the past year, and it's paying off.

"I did research into the top men and women in sports. The common theme was they were all so professional. They wouldn't allow anything to break their rhythm," he said.

"That kind of consistency allows you to be a Tiger Woods or Roger Federer. They simplify their lives to get everything in their power to achieve their goals. It was a bit of self discovery. I had a successful year in terms of results. It was one of my best years."

Dabeka, a member of the R.A. Badminton Club, starting planning for his Olympic qualifying run early in 2007. He selected the tournaments he felt were good for him to earn the maximum number of qualifying points, booked his own travel and co-ordinated his own accommodation. It's all right there on his $35,000 credit card bill.

"I've done well to be self sufficient. It helps to become a better athlete. The top players don't leave things for coaches to do. They do all of their preparations themselves. They take responsibility for their own careers."

The Canadian Olympic badminton team will be compact in Beijing. Besides Dabeka, Mike Beres, also of the R.A. Badminton Club, and Valerie Loker of Laval, Que., will play mixed doubles, and Anna Rice of North Vancouver is in women's singles. Instead of having a coach and manager, Jean-Paul Girard of Montreal will assume both roles.

During his Olympic qualifying journey, Dabeka reached two finals -- the VII Italian international and Pan America championships -- and four other semifinals. But it wasn't only about scoring the qualifying points.

"I also had a lot of first-round losses to the No. 1, No. 2 and No. 4 players in the world," he said. "It was great experience that I faced and saw that standard. Those were basically training weeks, where you go out and do your best."

At the French Super Series tournament last fall, Dabeka took 2004 Olympic singles champion Taufik Hidayat of Indonesia to the limit before losing in the first round 21-17, 13-21, 21-19.

As for the Games in Beijing, Dabeka has an Olympic ranking of 20th based on points for the 38-player men's singles draw.

"This gives me a great opportunity to advance farther into the tournament," he said.

Dabeka's positive attitude is sharply contrasted by how he felt about his Olympic chances in April 2007, a month before the start of qualifying.

Playing in the XII Peru international, Dabeka expected to go deep into the singles draw, but was shocked to be eliminated in the opening round by a home-country player.

On the verge of losing his federal Athlete Assistance Program funding, Dabeka "contemplated not trying to qualify for the Olympics because my knees were so irritating."

But his girlfriend and player Huwaina Razi of Switzerland convinced him to sleep on it and make a decision the next day.

Dabeka promised Razi he would go to one more tournament, the Miami Pan Am international, to try to regain his federal financial footing of $18,000 annually.

His strategy worked as he struggled through a three-game quarterfinal match, but easily captured the semifinal and final to win the title and secure his funding, which was crucial to chasing a berth in the 2008 Olympics.

-- Source of this article: www.ottawacitizen.com